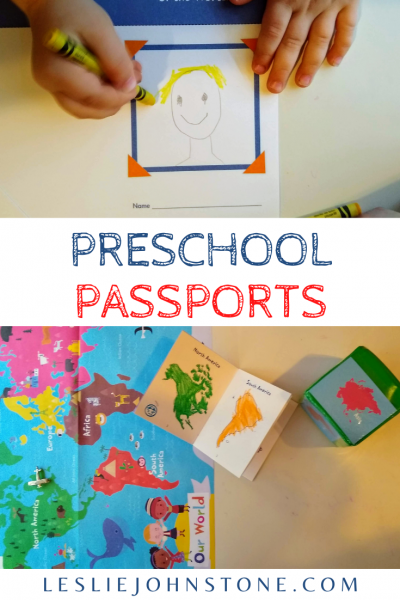 Traveling is hard these days, but our Experience Preschool box makes it so much fun as we gear up for Going on Safari this upcoming month in January. I’ve been looking forward to this box for years! Its one of my ultimate faves, and I wrote my most favorite post on it here.

When you travel, you have to have a Passport, and on Lesson 1, Experience Preschool provided just that in our Creative Corner Time.

Experience Preschool sent us 2 Passport pages that were front and back, so when it was assembled it would become a passport booklet with all the continents, an identification page, and a few blank pages at the back of the booklet. It’s fantastic!

First things first, a self portrait. The kids drew themselves and wrote their names on their passport page. I did draw a head shape with a neck and shoulders for the two four year-olds, but my 7 year old daughter (who still loves and learns from this box- with simple modifications to boost to her level) drew herself in her self portrait box.

When they finished drawing their self- portrait, I showed them how to match their continents on their passport coloring page to the continent on the map. I told them to color it the same color like it was on the map. This would help so much in our Continent Toss game which we were going to play with our Passports.

Once they finished coloring, I cut their passport coloring pages in half, folded them them crisply, assembled them in the correct order following the page numbers printed at the bottom of the passport pages, and then stapled it together. Voila! Instant Preschool Passport!

Now to play with it….

Experience Preschool sent us a world map along with some continent cutouts that slip into a pocket cube. You could put them on a box or just make a stack to draw from and mix it up occasionally if you don’t have a pocket cube.

Roll the cube and see what continent it is.

Ask what color the continent is. Kids answer and then use a marker (piece of paper, toy of some sort) to fly to that spot on the world map. I used some planes I had from our Good and the Beautiful math box, but you could totally use the travel toy manipulatives from the November box! I just had them put away at the time.

They then found that same continent in their passports- having colored them the same color as the map helped immensely!

Time to stamp the passport on that continent and roll again. Experience Preschool even sent us a stamp to use and the kids did a great job sharing it.

Once the game was over and we had traveled for quite some time, the passports were covered in stamps- some continents receiving several stamps.

Later this week, my 7 year old and I will make a bar graph of the amount of stamps that are on each continent. My preschooler can help count the stamps on that continent page, but she will be the only one actually making a bar graph. Then she can write about the results of the what the graph shows: which place was traveled to the most? least? the same as another? Love it when a lesson covers multiple areas in our homeschool!