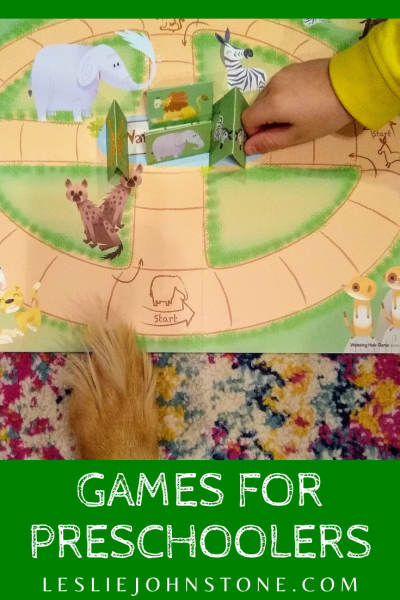 My son LOOOOOVES games! It doesn’t matter if it is a board game, learning game, puzzle, or electronic device game- my 4 year old boy is obsessed. This is one reason why I love Experience Preschool. They load their theme box with tons of games!

This month as we have been on an Adventure Safari, we have had the opportunity to play 7 different games (but this doesnt include puzzles or matching games)!

Our first day had the Continent Toss Game which I wrote about here. He loved that game.

One of my daughter’s favorite books when she was a preschooler was The Water Hole by Graeme Base. It is absolutely exquisite in its illustrations and has a beautiful story of conservation. You meet animals from all over the world and can search for hidden animals within the picture. Seriously this book is as much for adults as it is for preschoolers.

My son had not had the pleasure of reading this book, so before we played our Water Hole Game, we cuddled on the couch and read The Water Hole.

I love how the Teacher Guide gives me a quick observation to see what my preschooler could work on. For instance,

He played this game over and over. Once with me, then the dog and me, and then with his sister. I so appreciate that she will just jump in and play with him even if the game is well below her abilities.

We also had another game that was much like the Water Hole game from our Rhino day, but this one was called Finding Water and it was from our Bird Day.

Everett wanted to hear the story of the Water Hole again, so we read it and even searched and found some of the hidden animals this time! Then I had to do some work, so I taught him how to play the game by himself and snapped a few pics before I had to leave.

To make this game a one player game, my son rolled the die and then moved the first bird. Then he rolled a second time and moved the second bird. He kept going in this pattern until all the birds were at the water hole.

The Teacher Guide suggested I observe:

So much fun! And tonight, as I prepped our new February Health and Fitness box I am so excited about the games in store like:

Hope you will come back soon and check it out!