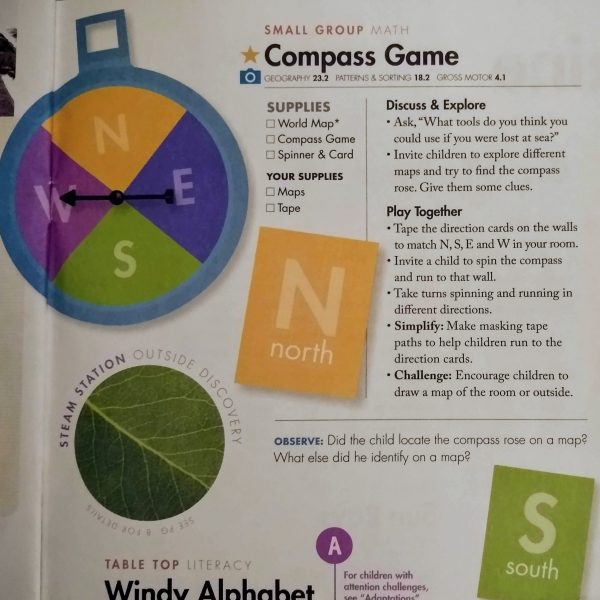 When I think of Wind, I always think the Holy Spirit. When Jesus is explaining to Nicodemus in John 3 being born of the Spirit, He says,

The wind blows where it wishes, and you hear its sound, but you do not know where it comes from or where it goes. So it is with everyone who is born of the Spirit.

My inlaws always talk in cardinal directions. They had a ranch for over 40 years. “It’s in the west pasture…. go the north gate…” It is like a foreign language to me. I just never really had to ever think about directions like that. GPS and Google maps began to exist shortly after I received my driver’s license. However, I don’t want my children to be handicapped to an electronic device; I want to instill wonder into my children… I want them to wonder where they are going and how they are going to arrive there.

Charlotte Mason included in her Original Homeschool Series books some lists of attainments, goals or objectives to be met by certain ages. She has one for 6-year-olds and one for 12-year-olds. One of her attainments for 6 year olds is to know the points of the compass with relation to their own home, where the sun rises and sets, and the way the wind blows. You can find more information about the list of attainments here.

When I opened up my Teacher Guide and saw our Wind day, I knew Experience Early Learning was going to help me attack this attainment for my 5 year old in a fun and engaging way.

I took the learning activity pictured above outside, because like Charlotte Mason said, one should “Never be within doors when you can rightly be without.” So, I grabbed some sidewalk chalk and drew large letters for the 4 main cardinal directions: North, South, East, and West. I told my kiddos the same mnemonic I told my 3rd and 4th grader students so long ago:

By the way, who eats that stuff? I’m not talking about the frosted stuff… I get that (somewhat), but unfrosted shredded wheat?! Ugh so gross.

I digress. Experience Early Learning sent us a compass spinner and 4 cardinal direction cards, which I did not use for the activity since I drew them with chalk outside. I did however laminate them and place them on the correct walls in our classroom.

Then we played our compass game which you can view below:

It was a blast and wore those kids out. I know you only see about a minute of our video, but instead of only using the spinner I started rephrasing what I spun. If I spun “E” for East, instead of saying “East,” I said “Go to the letter where the sun rises.” If I spun North I worked on a gross motor skill like jumping, skipping or hopping. “Hop to the letter N! What sound does it make?” So much can be reviewed and learned by just changing our words a little.

While we were outside, we even had a boat race and blew in some toy boats I think I got in a Chickfila meal a long time ago. I timed the kids to see how fast they could get their boat around the water table. The strength of their windy blows made all the difference.

But that’s not all that we did as we studied Wind. You know we read some great books! We have a weather set from Usborne (Windy Day, Sunny Day, Rainy Day, and Snowy Day) and the word choice is so beautiful in all of the books! Usborne has since turned them into board books, but the story is the same.

We read the story of The Sun and the Wind from Aesop’s Stories for Little Children which I REALLY needed to hear because ever since we took my son’s pacifier away (which he used to fall asleep), his fits are to the EXTREME! He laid down some forceful blows on our Wind Day, and gentleness was not my first thought. The Lord gives us exactly what we need. He gave me this story on a day where I so needed to hear that Gentleness is better than force.

Our Invitation to Create had the kids creating their own boats. Experience Early Learning sent us a beautiful picture of a sailboat, paper plates, popsicle sticks, and white cardstock. I supplied markers, paint dot markers, scissors, glue, and stickers, all of which I keep on hand at all times. The kids supplied the imagination.

Love their creations! One of the 5 year olds asked for more popsicle sticks, which I had on hand, so he added more to his boat than the other two.

Our day didn’t end there! We ventured back outdoors to dance to our Music CD from Experience Early Learning. We waved muslim nursing blankets in the wind while the kids danced to the music and they had a blast!

It was pretty hot, so I turned on the fan after all that dancing and let the fan make the wind to blow bubbles. The kids loved that!

Whew! What a day! We ended our day with PB&J sandwiches shaped as boats. A perfect ending to a Windy learning kind of day.