A week ago… was it a week ago… yes… well a week and a half ago… I went to CAMT – a math conference for Texas teachers.  I went to a workshop hosted by Box-Cars and One-Eyed Jacks.  They have FANT-A-BULOUS  ideas for games with dice and cards.

Since I am starting at a new school, I needed dice and cards for this new station I am going to implement.  So I went to the most logical place…DOLLAR TREE!!!  I puffy heart that place. 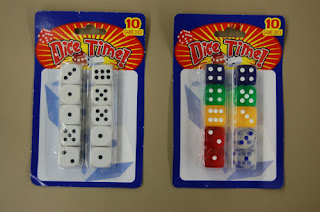 I am going to use the colored dice as negative numbers.  We cover positive and negative integers in 6th grade so it will be an easy way to add or even subtract numbers. Well, I bought at least 6 packages, and then I bought some weird, fun dice at the conference.  Then the next question that popped into my head was “How am I going to organize this??”

Enter inspiration from pinterest… By the way: Can anyone tell me how to make an account???  I REALLY want to pin stuff!!! Thanks!  🙂 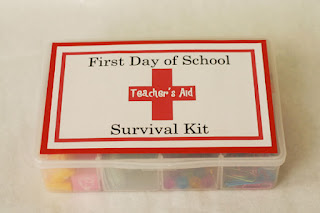 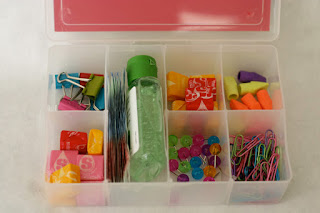 So I went to Wal-Mart on the hunt for one of these craft organizers… but I found something better… I think anyway…. I lure box for $4.00 in the fishing area. Here’s a pic with the label on it. 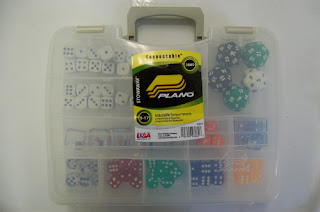 The AWESOME thing about this box is that it had dividers you can insert where you want.  So after I organized all my dice it looked like this: 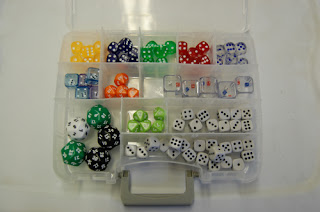 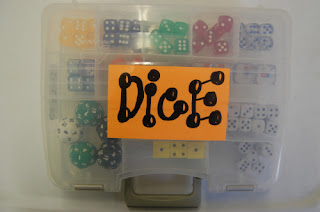 I use to teach 4th grade math and we used Everyday Math. We had a ton of cards and I colored each side of the different decks with different permanent markers.  That way if one fell on the floor I could say “Who has the yellow deck?”  Instead of “Who is missing a 4?”  Made life pretty easy.

Well at my workshop, the instructor said that if his kids weren’t playing games in 30 seconds, then they weren’t really interested… he had to make it happen QUICK… so he suggested for teachers to organize all their cards into 2 boxes.  One box 0-5 (king becomes 0) and a 6-12 box (jack=11 queen=12). 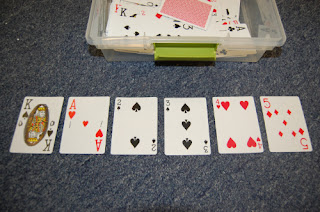 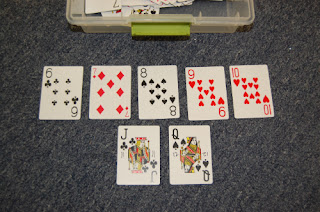 This way when you are just beginning a concept, the kids can grab from the 0-5 box.  When you are ready to challenge them, have them get 6-12 or some from both.  He also suggested that the students just get a handful of cards, shuffle them by mixing them all together on the table, and just saying here’s half and here’s half and letting the partner choose which half he wants.  This takes like 20 seconds or less… no more … one for me… one for you… takes forever.  So here are my 2 boxes which I labeled later. 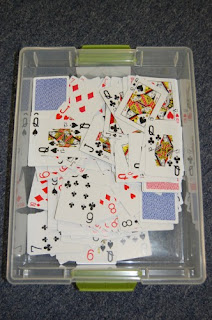 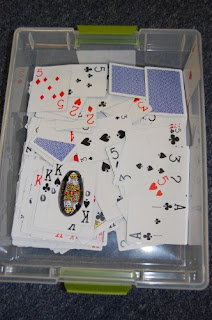 This will drive me  a little crazy for awhile since I am PSYCHO about organization and balance… I was starting to freak out when I was getting all the cards mixed up… and started to panic when I drew in permanent marker on my cards.  🙂  Still makes me cringe a little looking at the pics…. but I keep telling myself… Leslie–you are saving at least 5 minutes of teaching time… breathe…..